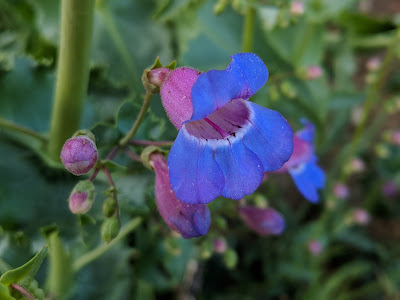 While hardly flat, after one big day of climbing out of Big Bear this section gets easier, with many long traverses that make for faster hiking.

It was the first section where the usual trail traffic seemed to thin out.  Big Bear, is 266 miles into the hike, and some people feel disappointed -- no great epiphanies, just a lot of dusty miles -- and some get off trail.  A French hiker I met made the point by whacking a rock with her trekking pole and exclaiming "this rock is boring."  This made me think of the doctor in Heart of Darkness who observes "... the changes take place inside, you know."  A long distance hike changes your perspective and your reactions, but might not give you much to talk about.  Perhaps it's like meditation in that way.

This is also when over-use injuries start to catch up with hikers.  The first round of blisters are under control, but now hikers are struggling with shin splints, and other foot and joint problems.  Lori, who I started the hike with had to get off trail at Big Bear to take care of her painful heel.  So far I'm holding together.

The highlight of this section was a visit to Deep Creek Hot Springs, which is only about 200 feet from the trail.  We all stripped down and had a good soak before hiking on.

Yesterday was also my first 25 mile day in 2018, and I am tired, but not too sore.  At the end of the day, Lori and Bill picked me up from Cajon Pass, and brought me to their home outside of Barstow for a rest day.  Tomorrow I expect to hike on.

Here are the photos for this section:
Big Bear to Cajon Pass photos
Posted by JKM at 12:42 PM 1 comment: 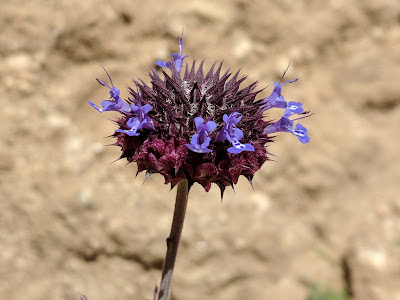 Our trail friend Patrick decided to hike on his own starting from this section, so we took a group photo and said goodbye for now.

The trail north from I-10 leads unrelentingly up for several miles, past the Mesa Wind Farm, and then along a ridge where we were kept cool with a light breeze.  Dropping down to the Whitewater Creek drainage we took a short detour to the Whitewater Preserve, which offers PCT hikers clean water and a field for camping.

The next day we climbed up and over a totally dry drainage, and then up onto a ridge.  While we hiked through fierce winds, we got to watch Mt. San Jacinto completely enveloped by thick clouds.  After being nearly blown off the ridge we dropped into the Mission Creek drainage, which we followed over the next ten miles or so, cris-crossing Mission Creek.

The rest of this section was bone dry and we needed to carry water for a dry camp.  Although extremely arid, it was great to traverse the beautiful landscape and enjoy the exotic clouds.

The photos for this section are in an album here:
Photos for I-10 to Big Bear
Posted by JKM at 8:11 PM No comments: 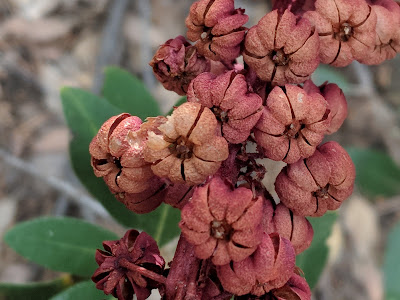 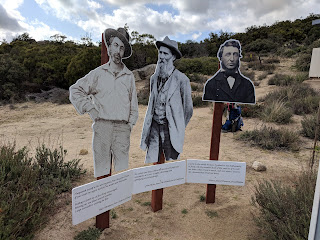 Here's a link to the photos for this section:
Barrel Springs to I-10 Photos
Posted by JKM at 11:23 AM 1 comment: 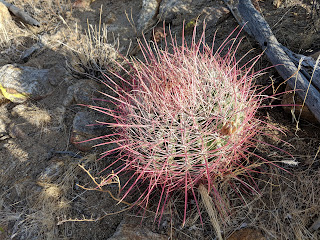 Trail friend Lori and I decided to set off on a PCT thru-hike on April 2nd.  Lori's husband drove us to the trail and we started off with the inevitable mix of excitement and trepidation.  If you want to follow the adventure of two 60 something hikers, this might be the blog for you.

We had pleasant weather and made it down to Hauser Creek the first night.  Mike and Laura started about the same time from Campo, so we all hiked in together for most of the day.  Giggles was already camped in her "purple condo" so we had fun chatting late into the evening, meaning about 7 PM.

Laura and Mike decided to continue with us, and Patrick joined up at Boulder Oaks, so we ended up with a group of five hiking together.  In the photo album you will see all these personalities, mostly with labels. 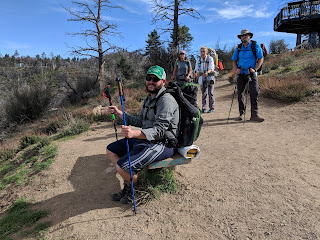 Excepting a few windy days, we had great weather.  Flowers were sparse compared to 2017, but we had amazing blossoming agave plants, and we're treated to many small patches of color. 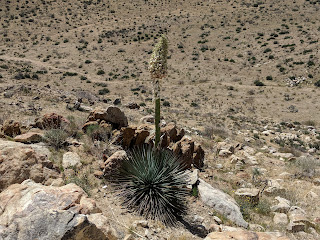 This is a beautiful landscape and great start to the trail.

101 miles in at Barrel Springs we took a day off at the Mountain Valley Retreat, which is a magical stop that welcomes hikers.

Lori developed bad blisters and decided to take a few days off to heal.  Luckily her husband Bill was still nearby and brought fruit pies for everyone and spirited Lori off for a few days.

To see the whole album of photos for this section, take a look here:. Photos for Campo to Barrel Springs