The Flip from Kennedy Meadows to Dunsmuir 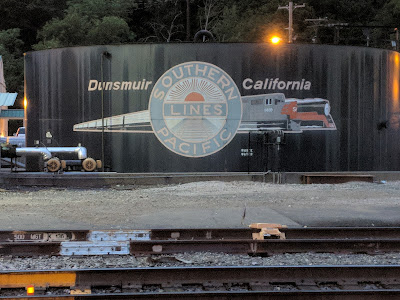 In a high snow year, the biggest schedule danger for many NOBO thru-hikers is waiting for the snow in the Sierras to melt.  As of May 16, 2019 the "Sierra Entry Indicator" suggests June 15th as the first safe entry day for the Sierras.  This timing will just barely work for hikers that were comfortable banging out 22.5 miles on an average day by the time they reached KM.  For slower hikers, June 15th is already too late.  See this post for more details:  When you should leave Kennedy Meadows

One option is to go into the Sierras early enough to get through before the melt takes hold.  This is tough for all but the more aggressive hikers, so if you hiked 18 to 22 miles on a typical day as you finished up the desert section, making it through the Sierras starting on May 20th or so is a risky plan.  You have a high likelihood of getting into conditions that you aren't comfortable with, especially high stream crossings.

Another good option for hikers that feel comfortable doing 18 to 22 miles a day is to flip up to Dunsmuir around mile 1500 and start hiking south.  This looked doable starting around May 20th and will be easier as the weather warms and snow melts off.  June 1st would be a very reasonable start for this section, much earlier than going up into the Sierras.  The 300 miles from Dunsmuir to Sierra City include some short snowy sections, but these are relatively easy to traverse -- more like Mt. Baden Powell than like Fuller Ridge.  You will still want your microspikes, but won't use them often.  Once you reach Sierra City, you will already be well into June and the Sierras will start to look friendlier.  Most of the really tough stream crossings are south of Sonora Pass, which is around mile 1000, so you will be hitting them later still.  If you want to see the snow conditions as of right now, please take a look at this page:  Postholer.Com PCT Snow Conditions Page

If you do this flip, you have to travel from Kennedy Meadows to Dunsmuir twice.  First, get a ride out of Kennedy Meadows and hitch or get a bus to Mojave or Bakersfield.  From there you can use Greyhound and Amtrak to get up to Dunsmuir.  For each trip, there is a total elapsed time of about 2 days, and cost about $100, although it can be done in just over a day if you get a perfect hitch out of KM.

I did this exact flip in 2018, and did a skip from Kennedy Meadows to Quincy and then hiked north in 2017 due to the snow conditions.  While not everyone likes the idea of a flip, if you aren't pounding out 25 mile days routinely, this is a good way to "bank" miles during late May and early June that you will need to complete the trail in 2019.
Posted by JKM at 1:21 PM No comments: 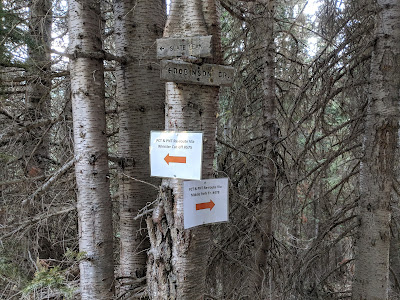 Hiking the PCT will be adventure enough without getting lost on a detour.  Good luck and enjoy your hike.
Posted by JKM at 12:23 PM No comments:

If you hike 22.5 miles per day, leave Kennedy Meadows by June 17 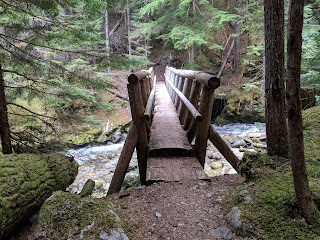 In 2017 many people told me on trail that they wouldn't finish because they spent too much time trying to get through the Sierras, or waiting out the snow between Kennedy Meadows and Bishop.  After hiking 2,000 miles in 2017 and thru-hiking the PCT in 2018, I've talked to a lot of people that missed a thru-hike by 150 to 500 miles, or 660 miles for me in 2017.  For many people, their miss was predictable and avoidable.

2019 looks like another high snow year, so if a thru-hike is important to you, the schedule math below should be important to you as well.  Everything is keyed to your average hiking pace.  For a NOBO hiker that's often what you find comfortable when you hike the Walker Pass to Kennedy Meadows section, or just a little above that pace. I've added a zero/resupply day every 8th day and set September 27th as your finish date in Manning Park, because weather usually gets dicey around then.

There are speed adjustments for each section since the Sierras are a lot slower than Oregon.  More details on how I calculated trail days for each section, as well as a discussion of each trail section and flipping, are in this post: Calendar Math


Here's a simple way to read this chart:


Putting all this math aside, just stay on trail and don't underestimate how long 2,661 miles takes to hike.  In 2018 I did not set out to do a thru-hike, but I did stay on trail and a thru-hike just sort of happened.  You can read about my 2018 hike here:  My Accidental Thru-Hike

Sweet and Spicy Ginger Cookies -- For Trail or Home 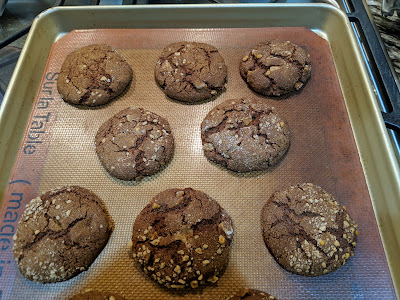 These cookies pack a sweet and spicy punch.  If bakery and commercial ginger snaps seem bland to you, then give this recipe a try.  This is a "double" recipe that makes about four dozen cookies.  Don't worry about overdoing it.  These cookies freeze well sealed in ziplock bags, and they also keep well backpacking due to a very low moisture content.

Directions:
Let the dough cool in the refrigerator for 30+ minutes, as it will be easier to work with, and this will also help to bring out the spice flavors.  While the dough cools, preheat the oven to 350 degrees and put silicone mats on your baking pans, or use a light coating of cooking oil.

Blackstrap molasses has a more bitter flavor than regular molasses.  If you have regular molasses on hand, you could adapt by slightly reducing the sugar.  King Arthur Flour works well for this recipe.