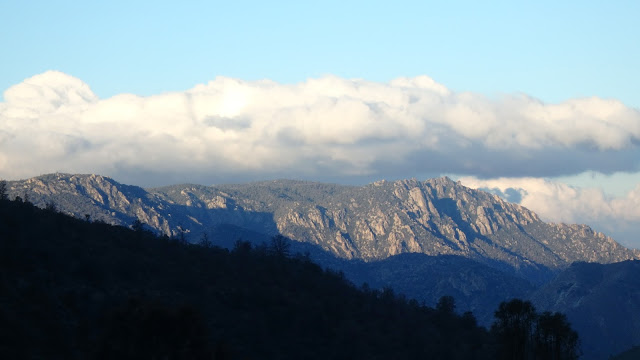 On April 17th Christine drove me from San Diego, where we had spent the weekend with our friend Mary Heany, to Kennedy Meadows, where I was going to get back on the trail.

Kennedy Meadows is a campground located way back in the mountains east of Bakersfield, California. We drove a winding 22 miles from the nearest big road to reach the campground and the PCT, which runs right through it.

From Kennedy Meadows I headed south into an enormous rock basin. Based on the trail register, I did not expect to see anyone else.  Being the only hiker in such a vast landscape made a profound sense of privilege settle on the experience.

The first night I camped next to Manter Creek, which bubbled pleasantly. Next morning, the play of light on the clouds was fantastic.

I had not done a good job of venting my tent, so the top quarter of my sleeping bag was wet, but it would take too long to dry in the cool morning, so I packed it damp.

The second day was a long haul of 17+ miles to a campsite at mile 676, which is situated on a saddle, in a perfect position to be buffeted by strong winds.

The beautiful morning clouds rained on me for two hours, then I hiked through chilling winds for most of the day. There were about 80 downed trees blocking the trail, which slowed down my hike.  According to the Forest Service, multiple drought years combined with beetle infestations have caused a massive die off. 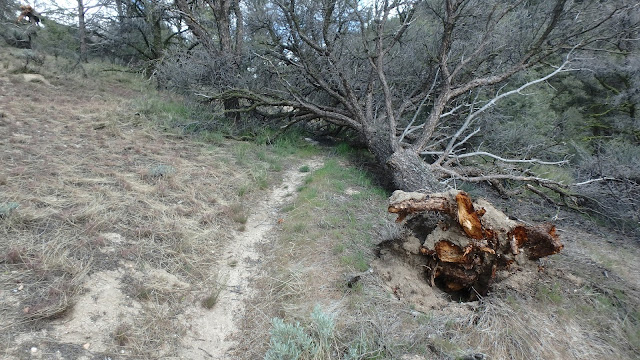 Despite having the right gear, I didn't stay warm and ended up exhausted, cold, and pitching my tent in high winds. It took two hours for my body heat to dry out my sleeping bag. I felt far from being a gnarly backpacker as I paid for my sloppy decision to put it away wet.

Day three was a reminder of how amazing it can be to be in the mountains while a storm system is passing through. When I woke up my tent was crusted in frost. I got off to an early start and continued down the trail in both my vest and jacket due to the cold.

After an hour I heard a shout from down the trail and soon met up with Andy, possibly the first hiker reaching this point from the south in 2017. He had started hiking in February, which is very early. With his steel-tipped, hand-carved walking staff, work boots, and corn-cob pipe, he seemed both unconventional and completely at home with himself.

Later, I enjoyed visiting with fellow PCT hiker Playdoh (real name Dana), and crossed paths with another hiker steaming up the trail who didn't even break stride as he raced by me.

That night I camped at Joshua Tree Spring, which was a very pleasant oasis in the desert.

Day four started off cold, with a brisk wind and near-freezing temperatures that kept me bundled up. I made it out to Highway 178 at 1:45 pm and got a ride into Lake Isabela exactly an hour later from a very pleasant Swiss couple who were in California on a road trip.

I'm now at the Lake Isabela Hotel, planning a return to the trail tomorrow.

Here is a link to the photo albumn for this section. https://goo.gl/photos/68pe4MX2iTBNYe6r5