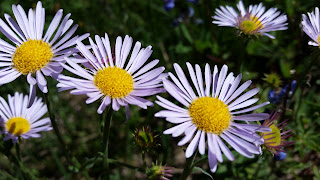 Hiking the "knife's edge" and surrounding trail was one of the few times on this trip that I have felt the absolute necessity of taking care with each foot placement.  The long drop off, steep trail, and loose gravel kept my full attention.  At the same time, whenever there was a flat spot, I had to marvel at the view of Mount Rainier and the closer mountains.  The Goat Rocks Wilderness between Trout Lake and White Pass was dramatic and satisfying.

Coming out of Trout Lake, the PCT skirts one side of Mount Adams, which is a popular destination both for the surrounding wilderness and as a summit challenge.  As the trail progresses there are some distant views of Mount St. Helens.  Eventually the trail transitions over to views of Mount Rainier and the rugged Goat Rocks Wilderness.   While the most dramatic section is only about 14 miles, it was so stunning that I can easily see why so many people make a special trip to hike it.  In this section I also met Gary Pegg who is attempting an equestrian thru hike - see www.garypegg.com

After White Pass the trail mostly kept to the forests, with occasional vistas.  On August 21st I ran into some day hikers who had a spare set of eclipse glasses, so I took an hour out to enjoy the 90 percent eclipse that we had.  The highlight of the next day was having dinner at a PCTA trail camp, and chatting with the volunteers.  Also during this section the trail ran just outside the closure line for several active forest fires.  I could both see and smell the smoke, but the fire wasn't too close.

As the miles tick by, I am looking forward both to attacking the most remote section of the PCT, and to reaching Canada, now less than 300 miles away.  Foot pain continues to be my major difficulty, and I will be trying some moleskin foam to see if that helps. For the time being, I'm still hiking!

Here is a link to the photo album for this section:  https://goo.gl/photos/6pVYuuaDMFMCGCyB8
Posted by JKM at 6:59 PM