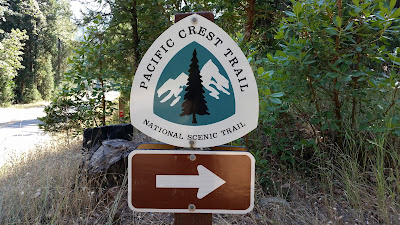 This year I retired on March 1st, then started on the PCT April 2nd.  I hiked two thousand miles on the PCT, three-quarters of the trail.  This is more backpacking than I had done previously in my life.  In this post, I'll share some of my reflections on hiking the trail.

But first, I picked out some of my favorite pictures and put them in slide shows of about a minute and a half each:

The Pacific Crest Trail
The trail itself is one of the best built and maintained trails anywhere.  It's hard even to imagine the amount of effort that volunteers, the Forest Service, the Park Service, and others put into the trail each year to keep it so easy to hike.  The quality of the trail makes a huge difference in speed and effort when hiking long miles.

As my trail hobby and contribution to maintaining the trail, I did an "obstruction survey" for the Pacific Crest Trail Association, using the GPS on my phone to note the mileage point of over 1,000 downed trees during 1,800 miles of my hike.  The list of obstructions was used by trail crews to help plan and prioritize removal projects.

Experience vs. Achievement
In a long-distance hike of the PCT you spend months living out of a backpack, your life becomes very simple, and you get in-tune with nature.  You are doing something you enjoy and have chosen yourself; for most people it's a magical experience and memorable time.

Hiking a long distance can also be thought of as some kind of athletic achievement, but it's probably better not to dwell on that too much.  After all, so many other things in life require more than five months of focus and effort.  I met one hiker who said that he thought people hiked the PCT for "the glory" of finishing the trail.  That did not ring true to me.

Deep thoughts
I was genuinely surprised by how physical the experience was for me, and how few "deep thoughts" I had while on trail.  When out hiking for a week or weekend, there is plenty to think about from your ordinary life.  Hiking for months at a time, mostly I was just thinking about hiking and enjoying nature.  Before getting on trail someone said to me "It's more of a mental challenge than a physical challenge."  That did not seem at all descriptive to me of the experience.

People
You naturally have a lot in common superficially with others hiking the trail.  This makes it easy to strike up casual friendships.  Also there is an unwritten "no whining" rule on the trail, which is probably the best part of trail culture.  I enjoyed the social aspects of the trail and will probably keep up with a few of the people that I met.  "Trail angels" also add a lot to the trail by providing an unexpected cold drink or ride into town.  Other than their interest in hiking, and ability to take several months off from their ordinary life, people hiking the trail seemed pretty ordinary or average to me.

Light and Ultralight Gear
Many hikers use "light" or "ultralight" gear on the PCT.  This makes sense as PCT hikers are unlikely to run into extended spells of snow or freezing rain as long as they start in April and finish by the end of September.  My "base weight" was about 25 pounds, which is heavy for the PCT.  I would like to reduce this for my next hike.  Carrying less weight translates into faster hiking speeds, which means more miles covered in a day (or more time watching the sunset).

Health and Pain
Almost everyone loses weight on a long hike.  I lost 25 pounds (yikes!), and also brought my cholesterol within the normal range.  Maintaining those benefits will be another challenge.

A large percentage of hikers have some pain from over-use injuries.  With arthritis in both knees, I anticipated some difficulties.  After 500 miles of hiking, I had to take eighteen days off to rest my right knee, after which my knees were "OK" for the rest of the hike.  My left foot developed pain that almost took me off the trail, probably from Morton's Neuroma.  I was finally able to get some relief with Moleskin foam, but still had a sore foot for about 700 miles.

Danger
A lot of people worry about dangers on the trail; however the trail is relatively safe most years.  My own hike was uneventful.  Here's a perspective on a short list of dangers:

Giardia - A few people get giardia every year because they didn't filter their water.  Probably 80+ percent of hikers are very careful to filter all their water.
Insect bites - Everyone gets bitten by mosquitoes, and a few people by bees or wasps.
Falls - A few percent of hikers have falls that cause some injury, usually scrapes or sprains.  Deaths of long-distance hikers due to falls are very rare, but can happen.  One PCT hiker died from a fall this year, and a few other hikers died from falls near the PCT.  Steep snow can be a little scary.
Drowning - Due to the high snow levels this year, two PCT hikers drowned in the Sierras.  This is unusual and was probably preventable; however, a lot of people had close calls this year.  Several non-PCT hikers drowned near the PCT this year.
Getting Lost - The PCT is such a major trail, that there are only a few situations when you will be off trail, such as hiking over snow.  Still, getting lost is probably the biggest single cause of back-country tragedy, so it's important to stay aware of where you are.
Hyper and hypothermia - These are almost always the result of poor judgement and/or inadequate gear.  One PCT hiker died this year related to overheating, and there were several rescues due to hypothermia or the risk of it.
Bears and Mountain Lions - Kind of like a shark attack, very high fear factor, but very low incidence.  No cases this year that I heard of.  I only saw bears once.
Snakes - I saw over a dozen rattlesnakes, but there wasn't really any danger from them as long as you didn't get too close.
People - Since hikers are carrying over $1,000 in gear, and some cash, you might expect more robberies and thefts.  This turns out to be very rare.

Conditioning
Coming from a sedentary job and just a moderate exercise regimen, I found that my personal fitness level improved every week that I was hiking, right until the end.  At 61 years old, it would have been much better if I had spent more time conditioning myself before starting.  The popular idea that you can get conditioned while on trail is more accurate for people under 40, who will find that their body responds faster.

Section-hiking vs. Thru-hiking
In an average year, perhaps fifteen percent of PCT hikers with a thru-hiking (entire trail) permit actually are able to finish the whole trail.  This year, due to the high snow in the Sierras, and the many fire closures, very few hikers will complete the entire trail in 2017.  I'm happy and satisfied to have completed three quarters of the trail and it has made me think about whether thru-hiking is really the best goal to have.  Personally, I now think that doing the trail over two years makes more sense for people who have that flexibility.  The short weather window makes a thru-hike very difficult to achieve on the PCT for all but the fastest hikers, and pushes other hikers into hiking later into the fall than they might want to, or trying to push into the Sierras before the streams have gone down to safe levels.  Also, fire closures (like we had this year) can prevent a thru-hike even for the fastest, most-aggressive hikers, so fixating on achieving a thru-hike can be frustrating for that reason as well.


Next year I hope to hike 650 miles to have completed the entire trail.
Posted by JKM at 1:56 PM