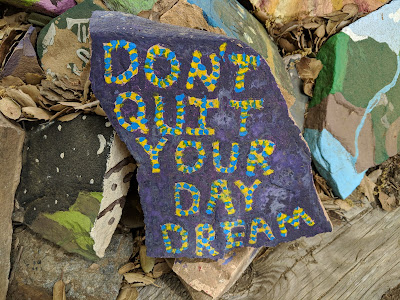 From Agua Dulce, the prosperous home of Hiker Heaven, hosted by Jeff and Donna Saufley, I joined a handful of other hikers making an early morning dash up the mountain range going north.  Higher elevations promised cooler temperatures in the middle of the day, but barely delivered relief.  We sweated out 24 miles to the next major road where trail angel Nancy Pants waited with drinks and a ride to Casa de Luna, where Terri Anderson and her husband host hikers for a Taco Salad dinner, pancakes in the morning, and "hippie daycare" during the day.  I took a rest day and reconnected with other hikers.

The next 40 miles also started with a morning scramble to beat the heat, but with an early start I made 25 miles the first day and then hiked down to Hikertown, another rest stop, on the second day.  Not wanting to linger at Hikertown, after a shower and doing my laundry in a bucket, I hiked on at 4:30 PM with another hiker named Shorts that I had camped with the night before.  We hiked along and over an aquaduct for hours, then were treated to a spectacular sunset.  Finally we flipped on our headlamps to hiked on until about 10 PM, making for a 28 mile day, my longest so far.

The next morning we were hiking by 5:30 AM to avoid some of the desert heat.  The wind picked up dramatically as we neared one of the many wind farms in this area.  Shorts out distanced me by midday when I made it into Tylerhorse Canyon, one of the few water sources in the area.  Mike Sauget was at the water and he hiked out with me through one of the driest landscapes we have traversed so far.  Mike and I had not hiked together since Deep Creek Hot Springs, so it was nice to reconnect.

We camped 17 miles out from highway 58, which is the main road into Tehachapi.  On the hike in we met Randy Masner of the BLM who was checking on a recently completed bridge and had the pleasure of thanking him for some beautiful trail improvements that he worked on in the past year involving what seemed like enormous rocks being moved by hand into position to prevent washouts.

Tehachapi has an extremely well organized community of trail angels, so Mike and I only needed to send a text to get a ride into town.  Christine had reserved a room at the Ranch Hotel for us, so we got settled easily.  The highlight of Tehachapi so far has been Kohnen's Country Bakery, which creates outstanding pies and pastries.

In contrast to this last section, I don't know of any major hiker gathering spots until Kennedy Meadows.  I plan to hike out tomorrow.

Here is a link to the photos for this section: Photos for Agua Dulce to Tehachapi
Posted by JKM at 1:05 PM