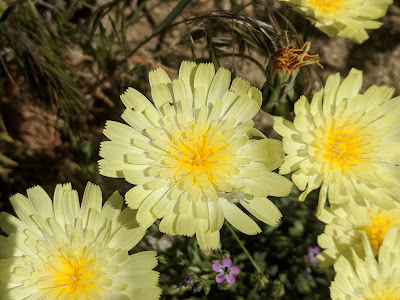 For those of you who saw the movie or read Wild, Cheryl Strayed's book that features her PCT hike, this is the section where she began.  After a couple of miles paralleling the freeway, the trail switchbacks sharply up, with 3,900 feet of climbing before reaching Golden Oak Spring after 17 miles, the first water in this section.  When I reached the spring about a dozen hikers were lounging there, including Scuba Steve, a trail friend who achieved a rare thru-hike in 2017.  They were mostly fired up to do a 27 mile day, targeting a large campsite further on.  In contrast, I was feeling like a 22 mile day would be perfect, so I encouraged them to blaze a trail and waved goodbye as they took off.

Hiking on, at about 6:30 I came to a camping spot that was so perfect it seemed almost like a desert vision.  Flat areas for tents, and tree cover to cut the wind.  I abandoned any thoughts of going further and pitched next to a newlywed couple that was hiking the PCT for their honeymoon.  We talked for about an hour about their lives, and it struck me how privileged I was to have this intimate glimpse into their hopes and dreams, even though we just met and might never see each other again.

The following day we had a repeat of the perfect hiking weather of the day before, with a cool breeze and warming sun.  This was also Mother's Day, so when I found a spot with cell coverage, I called my wife Christine to remind her of what a great mother she is.  I reminded a few other hikers to call their mothers and reflected that most of the people on trail were at least a generation younger.

Hiking on, the trail reaches Landers Camp, the last natural water source until a spring 35 miles distant at McIvers cabin.  That spring is sometimes dry, which then makes the next water source at Walker Pass, seven miles further on, potentially resulting in a 42 mile water-less stretch, the longest water-less section of the PCT.  I carried 5.5 liters from Landers Camp, which would be adequate to get to McIvers Spring given the cool weather we were having, but hoped for a water cache at Bird Springs Pass to supplement what I was carrying.

Along the trail I caught up with Shorts who I had night hiked with out of Hikertown, and Crush, his current hiking partner, who had taken a three month NOLS course in Alaska and was therefore prepared for Sierra snow travel.  The three of us hiked into Bird Springs Pass together and were rewarded with a fantastic water cache of about 150 gallons.  We all cooked a meal at the cache and I drank about a liter of water.  Christina and Luke had arrived ahead of us and were lounging in the very small patch of shade made by a Joshua tree at the cache.  Suddenly the two of them jumped up so fast it was like a Jack-In-The-Box had sprung.  A Mojave-green rattlesnake had come out of the bushes and headed straight for them, giving them an adrenaline-fueled bounce to their escape.  The rest of us at the cache were more amused by the spectacle of their retreat than worried about the snake, although a strike would be serious and probably require a rescue operation.  Just another minor trail drama.

Hiking out of the cache I surprised another rattlesnake who was just one foot off trail in a bush and dazzled his rattle at me before slithering off.  Although rattlesnakes are obviously dangerous, since hikers don't fit their prey template, strikes are rare even though encounters are frequent in the desert section.

This section is one of the more beautiful in the lower 702 miles of trail, and it also has many transitions between ecosystems with elevation changes as well as ridges that separate weather systems.  It also marked 2,700 miles of hiking on the PCT between last year and this one for me (the trail is 2,650 miles in total), and it gave me some reason to reflect on what I like about long-distance hiking.
After the water-less section the trail drops down to Walker Pass where Kirk, a friend of Shorts, had brought a cooler of sodas, beer and sandwich fixings.  Hikers around cold beer and fresh food could fairly be compared to sharks in a feeding frenzy, although with the obvious difference that sharks don't drink beer.  After every slice of bread and lunch meat had disappeared Kirk gave me a ride into Lake Isabella where I enjoyed a hotel room for one night, and a Cobb Salad at the Dam Korner Cafe.  I took a Kern County Bus back to the trail the next day.

The last 52 miles into Kennedy Meadows are beautiful, and relatively easy hiking.  For some reason, I carried 4 liters of water out of Lake Isabella even though there was a spring at 13 miles in and just one-quarter mile off trail.  If everything happens for a reason, it made sense to have so much water as I met Jonathan and his dog Bonnie who had completely run out of water, and I was able to give them a liter even though I had skipped past the spring to wait for the next water source.  The rest of this hike was uneventful. Hiking this section for the second time I was able to appreciate it more as the weather was perfect this time, and by contrast it was storming, wet, foggy, and cold last year.

Once at Kennedy Meadows, I was underwhelmed by the KM General Store, and moved onto Grumpy Bear's Retreat, which has a cafe, showers, and laundry options for hikers as well as places to pitch a tent.  I reunited with several other hikers, including Mike Sauget, Shorts, Crush, Dirty, Waltzing Mathilda, Sweet Tooth, and True Grit, who is hiking with her two kids.  A friend had offered to give me a ride home from Kennedy Meadows, but got a knee injury just before leaving ... so after asking around at the bar, sending a few texts, the magic of the internet and a lot of kindness an alternative plan came into being composed of a ride to Inyokern from Bob, a local old-timer, a ride from Inyokern to Barstow from Lori Getzlaff, my hiking partner with the injured foot, a bus from Barstow to Bakersfield, and a train to Richmond, CA where I live.

Right now I'm home for a few days and will get back on trail on Friday May 25th.  My plan is to take the Amtrak up to Dunsmuir, get a ride to Castle Crags State Park, and hike south from there.

The photos for this section are in an album here:  Tehachapi to Kennedy Meadows Photos