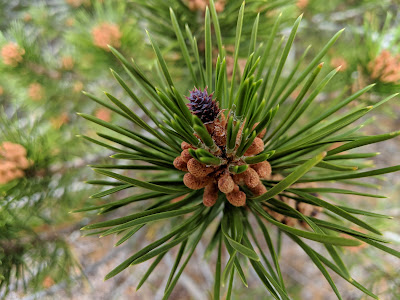 After a resupply and refresh at the Mt. Williamson hotel in Independence, I climbed back over Kearsarge Pass and into the last stretch of the high sierras.  In addition to the PCT mileage, this section includes an additional 24 miles of trail by the time you have hiked in from Kearsarge Pass and climbed Mt. Whitney, so it's a meaty 111 trail miles of hiking.

The first day back on trail I hiked close enough to Forrester Pass to climb over it in the early morning the next day.  At 13,200 feet, this is the highest point actually on the PCT, and I was slightly worried that it would leave me short of breath as I have not been that high for over 30 years.  The trail on the north side was well switchbacked, so it wasn't a hard climb, and I got up easily.  At the top, it looked like someone had come up and planted purple flowers all over, and it made me think of my younger daughter who loves to decorate for any occasion.  The south side of the pass rises much more steeply, and the route is a really audacious example of extreme trail building.  I read somewhere that the pass was "discovered," but I think "created" would be a much more accurate description.

After Forrester Pass the next major stop is the Crabtree Ranger Station campsite, which is the staging point for PCT hikers climbing Mt. Whitney.  While Mt. Whitney is just 7.5 miles from this campsite, climbing almost 4,000 ft. to reach the top at 14,505 ft. still makes for a significant effort.  The trail passes by the beautiful Guitar Lake, where JMT hikers are allowed to camp, and rises steeply through a series of switchbacks.  The last 1.9 miles includes a lot of rough trail, and like the south side of Forrester Pass a lot of the trail building alternated between blasting out a path and creating a path through the air with dry masonry walls.  I left my campsite at 5 AM, starting out with my headlamp, and reached the top at 9:30 AM, just in time for the threatening clouds to part a little and for sunshine to warm the summit.  A forest fire was burning on the east side of the mountain, so the views were a little hazy, but it was still spectacular.  At about 10:20 AM I headed down, meeting my trail friend Patrick and his brother who were just summiting as I was leaving.  As I walked off the summit a gentle rain started and continued off and on until I was nearly back to the campsite.  At this point the rain increased and fell steadily for several hours, so after a quick dinner under the trees I just napped in my tent, giving up on adding any trail miles that day.

The next two days I was focused on "making miles" and getting back home for a visit with my family.  The first day I just hiked steadily and surprised myself by making 28 miles to a perfectly flat campsite in a sparse forest, hiking through light rain for only about an hour that day.  At this point I was about 37 miles out from Kennedy Meadows, so I planned to get off trail after another day and a half of hiking.  This plan altered when about 4 PM the next day the sky opened up with lightning, thunder, hail, and then heavy rain.  I didn't see a lot of point in trying to make camp in that wet mess, so I just kept hiking, confident that the rain would run out as the day went on.  At about 8:30 PM, with intermittent rain still falling, I got out my headlamp and hiked on until 10:00 PM, when I reached the Kennedy Meadows campground, making for a 34.8 mile day, my longest hiking day ever.  I must have seemed like some kind of madman, arriving at 10 PM at night and packing up then next morning before 5 AM, but I wanted to finish the section and get home.

At 6:06 AM I stepped out onto Sherman Pass road, connecting to my hike from Campo to Kennedy Meadows, and completing the southern 1,498 miles of trail.  I started a road walk toward the Grumpy Bear restaurant, where I planned to get breakfast at 8:00 AM and see if I could get a ride out to the highway at 9:00 AM.  At just about 7 AM the first car approached and so I stuck out my thumb and was lucky enough to get a ride out of Kennedy Meadows with a meadow conservationist, who took me all the way to highway 395, improving on my plan by at least 2 hours.  Ten minutes after getting to the highway I got a short hitch to Inyokern, planning to next hitch on to Mojave, where I could catch a bus to Bakersfield.  After only 10 minutes a Jeep pulled up and I got a miracle hitch all the way to the Amtrak Station in Bakersfield, arriving at 11:10 AM, allowing me to catch the 12:00 noon train to Richmond, and arrive home just at 6:06 PM, exactly 12 hours after starting my journey home.

I'll be at home for a few days, then Christine, my wife, will drive me to Crater Lake to get back on trail.  I'm getting back to the trail north of Dunsmuir because there is a big fire still going near Ashland, so the trail is closed there, and the air will be smoky.  My plan is to hike north up to Manning Park, then finish the section from Dunsmuir to Crater Lake after a short home break.

The photo set for this section has more amazing mountain views, and some of the most impressive examples of trail building that I've hiked.  Photos for Kearsarge Pass to Kennedy Meadows