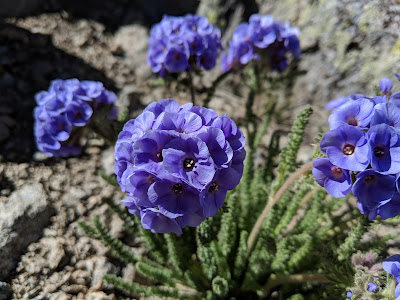 This post necessarily covers a lot of mileage as I have not had network service through the High Sierra's.  Right now I'm at the Mt. Williamson Motel in Independence, where I stopped for a resupply.

First, no words of mine could possibly convey the jaw dropping beauty of these mountains.  Neither can I fully convey the effort of hiking over so many high passes, which is the price of admission to this astonishing "range of light." In the photo album there are hundreds of photos to give you a bare idea of the landscapes.

Coming out of the Kennedy Meadows Pack Station I faced Sonora Pass South side with some trepidation.  Other hikers had advised that it was dangerous, with many steep, slippery, and exposed snow sections.  As if to add emphasis to this warning, one of the hikers coming off the pass told me that it "wasn't that bad," but couldn't hide the blood dripping off his arm where he had ripped a ten inch scrap of skin off in a fall on the pass.  Luckily I was carrying heavy trail spikes; these strap on and add about a dozen half-inch steel spikes to each boot that bite into hard snow and ice.  Although the pass was slow and sometime nerve wracking, it went fine.

That was the last "bad" snow that I had to face.  The trail from that point to Tuolumne Meadows alternated from easy forest and meadow trails to extremely steep trails with many loose rocks, which I have nicknamed "ankle breakers." These steep trails are very slow for me, as I have to "baby" my knees, but I kept up my mileage, partly out of pride, and also because I was only carrying enough food to stay on schedule.

When I reached Tuolumne Meadows, the Post Office was closed, so I stayed over in the Backpackers Camp and enjoyed a hot breakfast before getting my resupply in the morning.  When I got back on trail, I had a minor revelation that the John Muir Trail, which the PCT overlays through this section, is one of the best built and maintained trails anywhere.  While the elevations and climbs present challenges, the trail itself is easy to hike.

Until reaching Kearsarge Pass, every day has had a similar pattern: climb up and over a ridge or pass, then down into a valley, then up the other side.  Most days involved 20+ miles and 3,500+ ft. of climbing.  Physically, this was some of the hardest hiking that I have done.  At the same time, the scenery was amazing and it was worth every panting breath.

Along the way I detoured through the Devil's Postpile National Monument; grabbed breakfast at Red's Meadow, and just missed getting to meet a PCTA trail crew there.  I took the ferry into the Vermillion Valley Resort and got my resupply bucket there, as well as three excellent meals.

In this section I met again quite a few people that I had hiked with previously, including Giggles, Kay, Out-of-the-Blue, Farmer, Anthony and Adrian, Four Eyes, River, and Patrick, who I started the trail with.  It's remarkable how small the trail can feel at times

Now that I have hiked South past the entire "bubble" of Northbound hikers, I've completed my taxonomy of hikers with respect to the Sierras in 2018:

Mountaineers - the super early into the Sierras who went through while everything was still frozen.  Another hiker called them the PTSD group, since they all seemed to be in a mild daze.  These were almost all men in their 20's.

Gnarliest - the next group in who went when the conditions were still dangerous.  Out of five people that I knew personally in this group, two had significant injuries, and one was almost swept away in a river crossing.  The other two just said that it was cold, exhausting, and slow.  Another hiker called it "type two fun," and clarified that it was fun to look back on, but not to go through.

Big Bubble - most hikers went through when conditions were safe and just called the snow "annoying."

Late Speedsters - hikers who started late, but who are hiking 25 to 30 miles every day.  These hikers fly down the trail with seeming ease. Yep, I'm jealous.

Math Challenged - hikers who think they are thru-hiking, but who haven't worked out that they can't possibly finish the trail at their current pace. I usually encourage this group to be happy with whatever they complete.

Rong Way - people who have flipped one or more times, usually to avoid hiking in snow, but also for an inexhaustible list of personal reasons.  I'm in this group, and flipped up to Dunsmuir and started South to minimize the risk to my fragile knees.

July 4th fell during this section, and I felt a strong sense of gratitude hiking the trail that day.  First I'm grateful to live in a country with such beautiful mountains; second, I'm grateful for all the effort to create the parks and the trails that make the mountains accessible; and equally I'm grateful to my wife and children for being so supportive of my hike.  I tried to express this gratitude in a video, once on Mather Pass, and then again two hours later at a lower elevation. Maybe some day I can find a more poetic voice.

This photo set includes a lot of panorama shots and a few videos, mostly of waterfalls.  Even though I can't respond to your comments while I'm hiking, I enjoy reading your reactions.  Photos from Sonora Pass to Kearsarge Pass