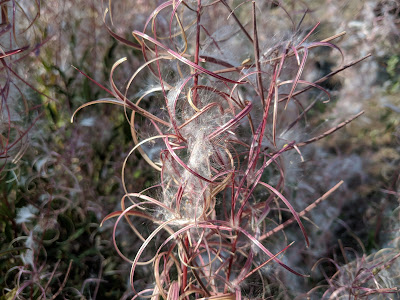 When I reached Rainy Pass the PCT was closed ahead due to an active fire, so I decided to head down to Crater Lake and hike this section, hoping that the trail would reopen.  I got a single hitch down Hwy 20 close enough to SeaTac airport to make it onto a flight to Medford the next morning.  On the way down Highway 20 we stopped at an overlook for Ross Lake where Poseidon, another PCT hiker, was considering canoeing to the border due to the closure. There isn't any public transportation from Medford to Crater Lake, and the smoke was keeping tourist traffic to a minimum, so I paid a taxi driver $120 to get me to the trailhead, getting back on trail just one day after leaving Rainy Pass.

The trail through southern Oregon has fewer big climbs than most sections, and the weather was mild.  Except for the first day hiking south from Crater Lake, the smoke wasn't too bad, just creating a haze that obscured the more distant mountains.  I made good time to Callahan's Lodge near Ashland where I expected a resupply package to be waiting for me.  My package had not arrived yet, and it turned out to be making a tour of Oregon, complete with stops at Eugene, Spokane, Portland, and Medford before getting to Ashland the next day.  Since I was tied down waiting for my package, Christine drove up and we had a relaxing day together at the lodge.

Hiking on, the trail crosses into California, then goes through Seiad Valley, the Marble Mountain Wilderness, the Russian Wilderness, the Trinity Alps, and Castle Crags before dropping down to I5, just north of Castella.  This section from Seiad Valley to Castella is one of the most spectacular parts of the trail with long high traverses through beautiful mountains and water from clear flowing springs.

The last day hiking through Castle Crags there was an enormous smoke plume from a nearby forest fire, and so much light was blocked by the smoke that it seemed like dusk had settled by early afternoon.  I had been "pushing miles," covering 89 miles in three days, so my feet were tired when I reached I5, expecting to hitch into Dunsmuir for a hot meal, and to catch a train to Seattle the next morning.

You know something is amiss when you reach a major interstate highway and instead of roaring traffic you just hear the wind blowing softly through the trees.  For a few minutes it was as quiet as the set of a movie scene in a dystopian future without cars.

After determining that I5 was closed to normal traffic, I shouldered my backpack and started up the on ramp, sharing the huge Interstate with occasional fire trucks and police cruisers.  After 15 minutes of walking, a combination backhoe and front end loader rumbled up behind me.  The driver invited me up into the cab and got me about a mile down the road before dropping me at the next exit.  He was evacuating by backhoe to save his equipment from being burned up.  I continued on foot one more exit on the Interstate then walked into the south end of Dunsmuir where I grabbed a sandwich at Manfreddi's Deli and got one of the last rooms at the Dunsmuir Lodge shortly after night fall.

In addition to the freeway being closed, Amtrak had cancelled the Coast Starlight train that normally stops in Dunsmuir, and Siskiyou County also suspended their local bus service.  Greyhound still claimed to be running a bus from Weed to Seattle, so the next morning I started walking, prepared to road hike the 18 miles into Weed if necessary.  After 10 minutes I got a hitch from a very nice Dunsmuir resident who progressed from I'm just going a mile up the road to "I guess I'm driving to Weed" as she contemplated my plan with an empathetic shake of her head.

Finding an inexpensive hotel near the Greyhound stop in Weed,  I had a relaxing day, feeling confident that I would be traveling on the once-a-day 7:10 am bus the next morning.  In case you are seeing a pattern here ... Greyhound was happy to sell me a ticket and even check me in for the bus, but when I reached the bus stop I learned that the bus had been cancelled from a waitress at the Dog Amigos Mexican Restaurant next to the Greyhound stop, who had checked the bus tracker.  But, not to worry, for $77 in cash I could get a seat on a "Mexican bus" to Portland in a few hours, and get onward transportation from there.

So, as I write this on a Friday, I'm sitting in a very nice, unmarked, nearly-packed bus, where English is definitely a second language at best, cruising toward Portland.  Either Saturday or Sunday I hope to be at Rainy Pass, so I can hike the last 75 miles of trail for this year.

You can see the photos for this section here:Photos for Crater Lake to Castella