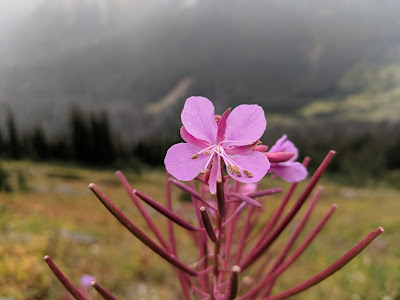 With this northern-most section of the PCT, I completed a thru-hike in 2018, hiking all 2,661 PCT miles from Campo at the border with Mexico to Manning Park, BC in Canada -- in a single season.  I'll post a more reflective bit on my overall experience this year in a day or two, so this post will just bring you up-to-date with this section and surrounding travel.

The journey from Dunsmuir to Rainy Pass was a bit of an adventure.  I shared the first part of this in my last post.  Without going into too much detail:  I hiked down out of Castle Crags State Park to where the PCT crosses I5, hoping for a hitch into Dunsmuir to catch an Amtrak train.  I5 was eerily quiet because it had been closed due to the nearby wildfires.  Unbeknownst to me, the trail section that I had just hiked was now also closed, it had just not been posted as closed when I hiked onto it that morning.  I5 seemed the safest place to hike, so I started hiking the three miles into Dunsmuir along the shoulder, with the occasional firetruck or police cruiser my only company.  After 15 minutes or so a combination backhoe and front-end loader rumbled up behind me and I was able to hitch a ride in the cab for a mile or so.  After another mile of hiking I was in Dunsmuir and spent the night at the Dunsmuir Lodge.

After phone calls to Amtrak and Siskiyou County, I determined that neither the trains nor local buses were running, so I was on foot until I could get a hitch.  Greyhound claimed to still be running a 7:10 AM bus to Seattle out of Weed, which is 18 miles north or Dunsmuir, and was past the I5 fire closure.  A local Dunsmuir resident gave me a ride into downtown Dunsmuir and after we shared a breakfast burrito she generously offered to drive me into Weed.  I think she was aghast that I was actually planning to walk the 18 miles if I couldn't get a ride.  Since my bus wasn't until the morning, I stayed overnight at the Sis-Q Inn, which was surrounded by 18-wheelers that had been diverted by the I5 closure, and across the street from where the Cal-Fire crews were staying and parking their fire equipment, giving the whole place a very industrial feeling.

In the morning I learned at the combination Mexican Restaurant / Greyhound Station that the Greyhound bus had been cancelled.  However, the waitress said that a "Mexican bus" would be coming through in a few hours, and for $77 cash I could get a ride into Portland.  Although this all seemed a little informal, it was better than hitch hiking up I5, so I rode the bus into Portland, probably the only person on the bus that was not fluent in Spanish.  In Portland the "bus stop" was just some open curb near a Burger King.  From there I grabbed a Lyft and had a very quick visit with friends Mary and John before catching the Bolt Bus up to Seattle.

In Seattle, friends Beverley and Bill picked me up from the bus-stop and took me in for the night.  In the morning, Bill generously drove me up to Sedro-Woolley, from where it seemed likely that I could hitch to the trailhead.  Like magic, ten minutes after Bill dropped me off, three gnarly rock-climbers picked me up in a very-experienced RV and took me over 50 miles up the road.  Two hitches later and I was at the Rainy Pass trailhead at 2 PM on Saturday.

The timing was just about perfect for getting on-trail and into the mountains.  Last year it was misty and raining when I hiked up from Rainy Pass, so I was really delighted that it was clear enough this year to see the extraordinary mountain views on the hike up.  I also passed a group doing "goat packing," which was a first for me, and a little humorous.  While I only hiked in 10 miles the first day, it was still a surprise that I didn't see any other PCT hikers on trail Saturday.  The next day it started raining lightly in the early afternoon, and kept up with intermittent rain or drizzle the rest of Sunday and on until Monday evening.  While I didn't push crazy miles, I did hike pretty steadily on both Sunday and Monday, making 56 miles in two days from my first campsite to the Northern Terminus (aka Monument 78).  Due to a fire closure, there was a detour from Hart's Pass to Woody Pass that added 4 miles to the usual trail length, but the alternate trail was well-marked and maintained, so it wasn't a problem.  I felt a bit of "finishing fever" during the last day of the hike, but mostly it was just wonderful to be up in the North Cascades enjoying the mountains.

On Monday night I camped just over the border in Canada, then tramped the last 8 miles into Manning Park in the morning.  I stayed overnight, did laundry, and dried out my gear at the Manning Park Hostel, then rode on Wednesday morning with fellow-hiker Bomber (Rick) and his wife Emily into Bellingham, WA, and on to SeaTac by bus, and then home via Southwest Airlines.  All of that travel was uneventful, although I did feel very out-of-place by the time I was at the SeaTac airport, with my unkempt hair and worn, if reasonably clean, clothing.

The scenery was amazing in this section, and I hope you enjoy the pictures:  Photos for Rainy Pass to Manning Park

As I mentioned before, I'll do a wrap-up post for the whole hike later.