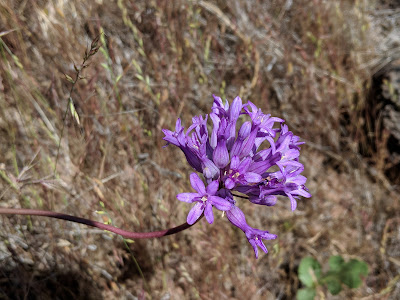 After reaching Kennedy Meadows, I went home for a six day break.  To get back on trail, I took a night train up to Dunsmuir, which is just a few miles from the PCT.  While waiting for the train to pull in at 5 AM, a former park ranger on the train offered me a ride to the trailhead, which saved me an early morning road walk.  There were a few other hikers on the train, but since they were in business class, they ended up walking to the trail.

The trail up from Castella rises so smoothly that another hiker described it as having been designed by railroad engineers.  I tried to get up a head of steam, but was tired, and already making slow progress when rain started falling at 11 AM.  At 13 miles in, I pitched my tent in the rain, and didn't budge until the next morning,  breaking camp as a light rain continued to fall.  So much for the desert, and welcome to Northern California!

The weather cleared up on the afternoon of the second day, and it has been pleasant since then.

Flipping to Castella put me in a much smaller group of hikers, giving me a lot more solitude.  Chatting with other hikers is enjoyable, but beauty, birdsong, and fresh air really carry the day for me.  I was thinking about why people hike the PCT, and it seems to me that there are three reasons: athletic challenge; fun adventure; and, self discovery or growth.  I'm mostly in the camp of fun adventure, but I have a dose of the others as well.

Before starting the PCT someone who isn't a hiker commented to me that thru-hiking is more of a mental challenge than a physical challenge.  I've puzzled over that comment and realize now after talking with other hikers that have experience on both trails that the AT is not physically demanding in the same way that the PCT is.  In fact the PCT and CDT are both physically difficult for most people to complete in a season, so just finishing the trail is a meaningful athletic achievement.

In this section the trail runs through areas that have been shaped both by volcanic eruptions and plate tectonics.  The Hat Creek Rim runs almost straight for 29 waterless miles along an escarpment of volcanic rock.  I was lucky to have cool weather crossing that section.  On my second day on the rim, I was rewarded for rising early by meeting a skunk crossing the trail in front of me.

The next day I woke in a beautiful pine forest and hiked into Lassen National Park, moving quickly to make it the 23 miles to Drakesbad Guest Ranch by 4:30 PM to pick up a resupply package.  I didn't see a single person during the hike, but did surprise a bear about three miles from the ranch.  They didn't have my package afterall, but did invite me to join their staff dinner of salmon, broccolini, and rice pilaf, finishing with strawberry shortcake, so any worries were forgotten.  I had only 19 miles to a road crossing for Chester, so I got on trail early and hiked through the park and on to the road.  Minutes later I had a ride into Chester where my package turned out to be waiting for me at the Post Office, despite being addressed to the ranch.  I enjoyed a late lunch and was hiking again by late afternoon, again getting a ride back in just minutes.

By day 10 of being back on trail I was ready for a rest day, so I've settled in on the porch at Belden.  Shorts, Crush, and Newt showed up, who I knew from the desert section, and we enjoyed a meal together, but since they are headed north I probably won't see them again for awhile.

I took pictures every day, so to get more of a day by day sense of the landscape, please see: Photos from Castella to Belden
Posted by JKM at 12:45 PM