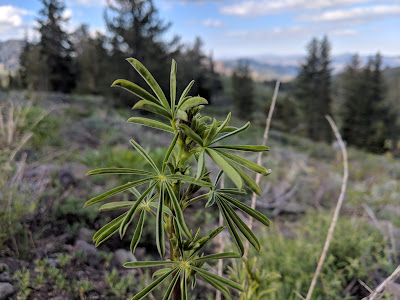 After my three-day home visit, my wife Christine drove me back to Donner Pass where I got back on trail continuing southbound.  I felt like a lumbering pack mule carrying food for a 140 mile section, the longest trail section I have ever carried food for.

Climbing out of Donner Pass the trail crosses highway 40 and an historic and defunct railroad line with the snow tunnels still intact.  Apparently the old right of way is now a hiking trail.

About six that evening I hit a large snowfield and began to ponder possible camping spots.  Using my phone to look at a topo map I noticed a map feature blink in and out of visibility.  Playing with the map I found just the right zoom level for the Benton Ski Hut to show up.  It felt a little like penetrating into another dimension to find this elusive marking.  The ski hut was just a bit off trail, and was a perfect shelter from the rising wind, with me as the solo occupant.

The next few days the trail was mostly clear of snow, with just small snow fields on the more protected north-facing slopes.  I had to work hard carrying my heavy pack, but the beautiful mountain scenery was ample compensation.

The second night I made it to Barker Pass, where I was again the only camper.  I was interested to hike through Desolation Wilderness the next day, where I had backpacked before, but never from this end of the park.  I wanted to get over Dick's Pass that day and had received many ominous reports of the snow that I would have have to cross to get to the pass itself.  Mentally I created a timetable for getting to the pass and just squeaked under it, crossing out of the snowfield at around 6 pm.  The trail down to Gilmore Lake was thankfully easy.

Waking to freezing temperatures at Gilmore Lake, I stumped out of the Desolation Wilderness, reaching the Berkeley Echo Lake Camp at around noon.  Just as I arrived at the camp, hail pelted down, and I ran the last few hundred feet.  Kate and Coltrane, two family friends, are working at the camp this summer, and I had intended just a quick stop to say hello.  The hail helped me decide to stay the night, and I spent most of that afternoon next to the fire in their lodge.

After breakfast and hugs, I headed out toward Carson Pass, with Sonora Pass my further destination.  Along the way I started seeing other hikers that I had met in the desert section.  The consensus seemed to be that pushing through the Sierras so early was exhausting, wet, cold, and dangerous.  Two of my trail friends had fallen and been injured, and one had a close call on a stream crossing.  As one hiker expanded "it was type two fun, not fun at the time, but good to look back on." Even though I didn't want that particular adventure, I can understand the impulse to do something really difficult and even risky as a contrast to our ordinay life.

Although I've now hiked more than 3,000 miles on the PCT, I'm often mistaken for a weekend backpacker by other thru-hikers.  On the run up to Sonora Pass I had unsolicited advice to be careful on the snow from two hikers, and replies to my queries that had me expecting a large snowfield on the way to the pass.  In the end the snowfield covered just a 0.4 miles of trail, so it wasn't hard to get past.  There were some points in the snow where a fall would likely be fatal, so I did try my best to stay upright.

During this section I met about 100 northbound hikers who had made it through the high Sierras.  This subset of hikers was dominated by men in their 20's, with all other trail demographic groups greatly under represented.  I think this will all change back to a more balanced mix further north.

To get an idea of the spectacular scenery in this section, take a look at the photo album here: Photos for Donner Pass to Sonora Pass
Posted by JKM at 1:14 PM